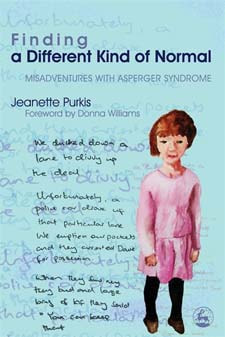 Jeanette Purkis spent her early life reacting violently against her feelings of embarrassment, anger and confusion about her ‘difference’ from other people. She was unaware until well into adulthood that everything she found difficult, including her lack of success in forming relationships, could be a result of having Asperger Syndrome.

Used to being a misfit from a very young age, Jeanette found that being a member of a group in which she had a label – Jeanette the Communist; Jeanette, Enemy of the State; Jeanette the convict; Jeanette the drug addict – gave her a sense of order she could depend on, particularly in prison, where each day had a set routine and the inmates accepted her because of her rebel attitude. Finally diagnosed with Asperger Syndrome at the age of 20, the author only began to accept her diagnosis some years later when she felt for the first time that she might learn to cope with being herself.

Jeanette’s remarkable life and her journey towards finding a different kind of normal is compelling and inspiring reading for people with autism spectrum disorders, and those living or working with them.