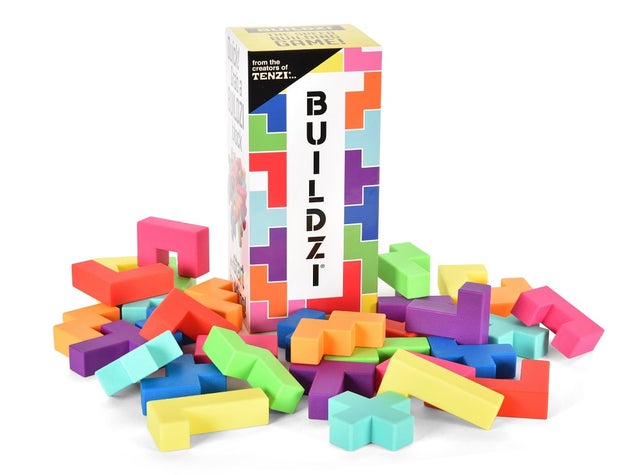 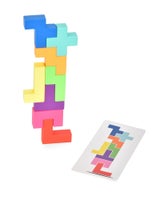 The speed building game! Buildzi is a game for 2-4 players full of fast stacking, nerve-racking gameplay!

1.Put the BUILDZI Blocks in a pile in the centre and deal everyone one tower card (yellow/black side facing up).

2.Someone says “Go” and everyone immediately flips over their tower card at the same time (so that the multi-coloured side is revealed).

3.Everyone quickly starts grabbing blocks from the centre pile. The first player to build their tower and shout “BUILDZI” wins!

For more challenging games try building the towers on the yellow/black side. These towers are a bit trickier to build and don’t have colours to help identify the blocks!

1.Put the BUILDZI Blocks in a pile in the centre. Each player gets one complete set of 8 Block Cards. (There are four different sets of Block Cards: Green, Orange, Blue and Pink).

2.Players shuffle their set of Block Cards and place them face down in front of them.

3.Someone says “Go” and everyone immediately starts flipping over their cards one at a time. After each card is flipped players quickly grab that block from the centre pile and add it to their tower.

4.The first player to build their tower and shout “BUILDZI” wins!

In keeping with the theme of Slapzi, Tenzi, Pairzi and Itzi there are multiple ways to play the game to allow for different age, skill and competition levels.